There’s something to be said for having the superior saw brand in your tool arsenal. But, often times figuring out which brand is the best is a bit of a challenge.

To simplify the process, we’ve compared Makita vs Dewalt. This article will give you an intimate look at the two companies as well as the very characteristics that make each brand unique in their own right.

But, we can only have one winner, and we’ll reveal which brand makes the best saw right here.

Both Makita and Dewalt were founded in the early twentieth century, and are longstanding brands in the power tool space.

​The History of Makita

​The history of Makita stems back to 1915 when it first launched an electric motor. This should have been a sign of what was to come from the company as these motors became an integral part of many of the tools it produced over its more than 100-year history

The electric motor that Makita sold so many years ago evolved it from a motor repair shop to the highly respected tool manufacturer it is today. You can still see glimpses of that electric motor design in its current products such its demolition saws, which extend over several power tool categories.

Today, Makita is a much different company than it was 113 years ago. It has global operations, and its products can be found in 40 countries. It produces its tools in eight countries with 10 manufacturing locations to date.

The pride of Makita can be found in its research and development expertise and experience. The Japanese-headquartered company pays homage to its humble beginnings in development by continuing to engineer tool designs that contractors need and want to use.

They offer efficiency and productivity – two factors that are key to a contractor’s success on the jobsite.

At the very heart of Makita is a drive to continually come up with power tools that deliver on quality as well as performance. This was evident in its first tool introduction with the portable electric plane it launched in 1958.

You can bet there was an electric motor designed by Makita inside too.

Next from the company was a groove cutter in 1962 and the list just continued to grow year after year. Today, its cordless tools utilize Lithium-Ion battery technology as well as innovative features such as anti-vibration technology, cutting precision and accuracy, and lightweight body designs using magnesium.

The U.S. base for the company is located in La Mirada, California. The company manages its distribution network for the location with U.S. manufacturing, distribution, and warehousing also in Texas, Illinois, and Georgia.

Global headquarters for Makita is in Anjo, Japan.

​The History of Dewalt

​Dewalt, one the other hand, is U.S. company that takes great pride in producing American-made tools for contractors as well as homeowners.

The company’s history dates back to 1922 with Raymond DeWalt, the founder of what is the Dewalt brand today.

DeWalt came up with the idea of forming Dewalt Products Company in 1922. It wasn’t until two years later that the company was created and opened its doors in Leola, Pennsylvania.

DeWalt was an inventor, and he wasted no time launching his first Dewalt-branded product with the Wonder-Worker – a woodworking machine that could be configured nine different ways.

The rest you could say was history for the company, as products flowed from its underbelly and a move to a larger location in Lancaster, Pensylvania, came shortly after. In 1947, the company was renamed Dewalt Inc., and it continues to hold the same moniker today.

Fast forward to 2001, and Dewalt is selling an expansive lineup of power tools that are more than 200 models strong and featured with more than 80 accessories and growing. Today, it continues to launch new products focusing on the rugged and toughness of its products that it recognizes need to stand up to the demands of the jobsite.

Many consider Dewalt the leader in the power tools industry as it holds a name that is known throughout the world. Its product line has a power tool for every application including sanders, powerful corded drills, and the attention to detail that has gone into each and every one of them makes them a brand that is trusted throughout the market.

Plus, it’s power tools are guaranteed, with many of them offering extended warranties.

​Comparing Makita vs Dewalt is a tough task – both brands offer quality and durability, while maintaining a focus on design. But, there are characteristics that separate them and helped us decide who really has the best saw brand on the market today.

​Both Makita and Dewalt put a high priority on research and development. Makita has been aggressive on R&D since it pioneered that first electric motor.

Their continual push to launch new power tools that make professionals better at what they do has earned Makita a name in the industry.

Not to be undone, though, Dewalt owns the top spot in many power tools, and has a strong focus on the United States market.

American Made vs Overseas

​The Dewalt brand is so well known, you’d be hard-pressed to find someone that hasn’t heard of the company. It’s American pride is strong, and if you’re looking to buy from a US company, Dewalt, much like its German counterpart Bosch, is the strongest presence you’ll find.

Many of Makita’s products are produced overseas, which some consumers frown upon, especially in the trades industries.

​When it comes to comparing the saw line up of Makita vs Dewalt, we have to give the upper hand to Dewalt. The company offers saws that cut with an incredibly high degree of accuracy.

They have the power you need to cut through the toughest of material.

Lets start with some similarities between the two brands… both Makita and Dewalt are on the expensive side. This might surprise some, as Dewalt’s brand is notably stronger.

Even with Dewalt’s high-end technology features, the company is able to be less expensive and less than many of its competitors, including Makita. Makita’s saws command a little bit expensive, but they do deliver with their R&D promise that their saws are one of the best on the market today.

Now lets talk about why we love Dewalt, after careful evaluation.

Dewalt uses 20, 60, and 120 V batteries to give you portable power in their cordless options, all the while maintaining power and consistency through the cut. Its saws are designed to last and make a strong investment for any consumer.

Makita also produces a saw line that is extensive and delivers on quality. It’s saws are lightweight, due to the magnesium used in their construction. They often weigh less than Dewalt saws, which is to Makita’s credit.

The less a saw weighs, the easier it is to maneuver and control without getting fatigued

Dewalt also receives high marks when it comes to offering warranties over Makita. Its coverage extends a lifetime on some products while many of Makita’s warranties top out at three years.

​Here’s an example of a product line that had us chose Dewalt over Makita: the impact driver. This is a defining tool for both companies.

Dewalt’s impact driver offers more power at 20 V than Makita’s models at 12 and 18 V. Plus, Dewalt integrates astounding technology into the impact driver, enabling Bluetooth that allows to track, manage, and customize the driver by using an app.

There’s not much you could ask from an impact driver than that.

​Makita is a very capable saw brand, and there are​ top models such as the JV0600k jigsaw that scatter throughout its product line of saws. We recommend the following.

Not only do these saws provide good cut speed and cut accuracy but they are lightweight and durable.

These are our top picks for the best saws from Makita. 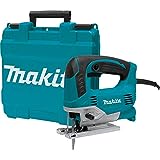 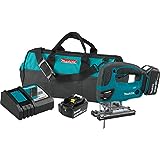 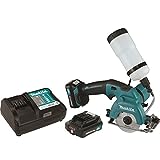 Dewalt, as you might imagine, has a full rollout of saws that we think are superior in every way to many of the brands in the market today, including Makita.

These saw models offer everything we think a saw should possess from quality cut speed to fine accuracy and the latest technology innovations.

There’s nothing these saws don’t miss the mark on and we recommend these top models from Dewalt here.

Choosing between Dewalt or Makita wasn’t an easy choice, but we were highly impressed with the saws that Dewalt produces on a consistent basis. The company delivers in every regard, and we recommend Dewalt over Makita time and time again.

Both brands have saws that make our top picks for corded and cord free jigsaw choices, along with other saw options like the reciprocating saw, table saw, tile saw, and scroll saw.

As much as we like the Makita’s attention to engineering detail and their lightweight tools, Dewalt just produces power tools including saws that are a cut above.

The company prides itself on producing products that are technologically advanced, and for this reason, we find that Dewalt is the best brand for saws on the market against Makita.