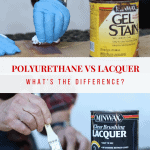 Among wood finishes, polyurethane and lacquer are two of the most popular ones. In fact, armature and season woodworkers tend to recommend them a lot for wood finishing.

Deciding which one of them to use can be pretty confusing, especially if you’re not an expert.

We’ll walk you step by step through their pros and cons, so you can decide which is the best option for your project.

Before we can compare polyurethane and lacquer, we need to know what they do and what their chemical properties are.

Polyurethane is a synthetic resin. It’s a wood finish for furniture, wood floors, and cabinets. It’s usually applied to furniture by spraying or wiping. The reason for its usage on wood is its transparency and water-resistance.

As most polymers are, polyurethane is either oil-based or water-based. Each has different properties, so let’s check them out!

Its biggest advantage is that it’s not toxic and doesn’t emit a strong odor. It also allows the wood to be easily cleaned with water. However, it costs much more than oil-based polyurethane, and it requires a lot more coats for it to offer protection. It’s also less available at hardware stores.

The most prominent difference between both types is appearances. Water-based polyurethane won’t add the amber tint that usually appears with oil-based ones. It just slightly highlights the wood’s color and gives it a high gloss.

It can be a bit harmful to human health, though, because of the chemicals used in its making. Furthermore, it has a strong smell and it’s hard to clean because it requires solvents.

Lacquer is widely known for its ease of application and fast drying time. It’s the most used wood finish commercially. Its primary component is the resin of varnish trees, similar to shellac. After harvesting and refining, the resin is mixed with thinner to create lacquer.

There are three types of lacquer that have different usages; water-based lacquer, Acrylic lacquer, and Nitrocellulose lacquer. The most known type in the market is Nitrocellulose.

Water-based lacquer is globally preferred because it’s less toxic compared to other types of lacquer.

Not only that, but it’s also more durable and lasts longer. However, it sometimes causes the wood fibers to swell, causing the grain to rise, which makes the texture a bit rough.

Furthermore, it’s the cheapest type of lacquer. However, it’s not always available at hardware stores.

Acrylic lacquer was manufactured to avoid the yellowing that affects the woods from other finishes. It mostly appears on light-colored woods.

Moreover, acrylic lacquer is more flexible than the other types and costs a lot more. It’s often applied to light-colored woods, and a coat is highly resistant to scratches and marks.

Nitrocellulose lacquer was a clear finish for automobiles at first, then people started using it for furniture later on. In fact, it’s now the most used type of lacquer.

A coat of this lacquer offers high levels of resistance, and it works well on both light and dark wood. It can blend into the previously applied coats, which makes it easier to repair.

The downside to it is that it’s very flammable. It also forms a yellowish color on the wood over time.

Also see our comparison of Pre-Catalyzed Lacquer vs Polyurethane.

In this case, there are a few factors that can be used to compare these finishes.

Lacquer vs Polyurethane Pros and Cons

Now that you know all the different properties of lacquer and polyurethane, you need to learn the pros and cons of both. It’ll help you understand the uses of each one.

How to Recognize Lacquer and Polyurethane

It’s important to learn how to recognize the type of wood finish, it can come in handy if you need to recoat or repair something.

It’s impossible to know just by looking, though. You’ll need to carry out a few steps to test the wood finish.

Let us walk you through them.

Pick a hidden spot on the back of the furniture piece. If you’re testing the wood floors, pick a spot that’s hidden under a rug or a table.

Step 2: See If It’s Lacquer or Polyurethane With a Coin

Pick up a coin, press its edge firmly against the hidden area and rub it back and forth.

If the wood isn’t affected, the coating is lacquer or polyurethane. Other wood finishes like varnish would cause the wood to flake.

Step 3: Rub it With a Cloth

Get a soft old piece of cloth and dip it into lacquer thinner, then rub it softly over your chosen spot.

If the wood remains intact, it’s polyurethane coating over it. If the upper surface dissolves, the finish used on it is lacquer.

If you don’t have lacquer thinner at the moment, you can use acetone instead. Dip a piece of cotton in the acetone and rub it softly over the wood.

If the upper surface beads, it means polyurethane was used on it. If it dissolves, it’s probably lacquer on it.

Polyurethane and lacquer both form a protective layer over the wood, and both add a nice glow to it. They pretty much do the same job.

However, when it comes to lacquer vs polyurethane, choosing the right one depends on the level of protection you need, the color you’re going for, and how often you’re willing to recoat it for a durable finish.