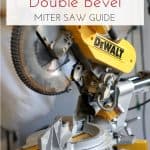 To help you decide which saw you should add to your workshop, we’ve compared the single vs double bevel miter saw. Here are our thoughts on the two types of saws.

What is a Single Bevel Miter Saw?

​A single bevel miter saw has a circular blade that spins as you cut. You lower the blade into position by lowering the head of the saw. This type of saw can move forward and backward, so you are able to make both left and right edge angled cuts.

This allows the two edges of your material to fit together without issue and provides that seamless corner look ​seek, much like how a circular saw operates.

You can also make beveled cuts with a single bevel miter saw. But, as indicated by the name, you can only make these cuts on one edge of the wood. This does give you a nice beveled edge and an accurate, precise cut.

You would have to flip your material over to create the beveled edge on the reverse side, which can be more time consuming.

​A single bevel miter saw will provide a number of applications where you are able to use the saw. This saw is a good option for cutting cornered angles for trim work or moldings.

It is also a good cutting tool for sawing picture frame or mirror frame pieces that need to fit together well in the corners. This is because of the ability to create an angle cut to any degree.

The best miter saw for beginners will typically be a single bevel option.

What is a Double Bevel Miter Saw?

A double bevel miter saw also cuts beveled edges by spinning the base of the saw to make the exact reverse of an angled cut. The result is two cuts that are designed to fit together without any issues. You’ll have the precise corner fit you need in many wood projects.

​A double bevel miter saw, as you might have guessed, allows you to cut two beveled edges without having to dial in a new angle of approach. You can cut both the right angle and the left angle without having to flip or replace your wood piece. This provides a more precise cut which can save you time as you work.

To cut the second beveled angle, you simply spin the machine to the other arm and begin to cut. This is a significant time savings as you can make matching cuts that can be fitted together easily. You won’t have to worry whether they will match or line up when mounted.

You’ll want to use the double bevel miter saw for molding and trim work like a scroll saw. It can also make fast work out of creating picture frame pieces.

​When you consider a single vs double bevel miter saw, there are many differences and some similarities. Both saws are able to cut a variety of angles by simply adjusting the angle of cut.

You can dial in the degree of cut on both saws and cut by pulling the head of ether saw downward. Both saws use a circular blade that spins as it cuts, and can be changed out when dull or broken. The type of saw blade usually determines the type of cut it makes.

The main difference between a single and double bevel miter saw is that the double bevel model can cut two bevels by spinning the saw base to the other side to create a reverse mirrored cut. This allows two pieces to fit in a tight corner arrangement.

A single bevel miter saw only has the capability to cut one beveled angle at a time, requiring you to flip and re position your wood piece to cut a new bevel.

The benefit of using a double bevel miter saw over a single bevel miter saw is the convenience of creating two end angles without having to flip your wood piece or set a new angle on your miter saw. This is similar to working with a sliding miter saw where it can make lengthier cuts that will work for your project.

This can save you a significant amount of time. You can quickly cut the two angles in a matter of seconds. It is also more convenient to cut two bevels at once, making you more efficient as you work.

While it may seem like a double bevel miter saw is a more beneficial option because you are able to cut two bevels in one set up, there are reasons many people select a single bevel miter saw.

The price of a single bevel miter saw is more affordable, making this a popular option for some people. You will find that a double bevel miter saw costs more, but it does offer you more versatility as you work. Which option that you choose depends on your budget as well as your needs for cutting bevels.