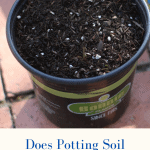 Potting soil is every home gardener’s best friend. This incredible mix of nutritious soil makes gardening in pots incredibly easy to do. You may find yourself with excess potting soil or used potting soil. And you might just be wondering if potting soil goes bad.

No, potting soil does not go bad. If you’re having problems growing plants in your potting soil, and you’re worried it is because it is too old, the more likely cause is that the soil acquired a disease, or is contaminated with an insect problem.

Look at your potting soil. If it looks just as it usually does and does not emit a foul odor, then it should be just fine to use even if it is old.

How Long Can Potting Soil Last?

In general, for as long as potting soil is kept in a closed container, in a dry and cool environment, you will be able to preserve unused or used potting soil. This can be re purposed at a later time.

Is it Safe to Use Old Potting Soil?

Old potting soil is absolutely fine to use. It doesn’t matter whether it comes from its original, unopened packaging, or it was already used to grow plants. The key to a successful plant growth with old potting soil is using it correctly.

How Should You Use Old Potting Soil?

You can also use your own homemade compost. Or if you can get your hands on red wiggler worm waste (black gold), this will be perfect too. For as long as you add nutrients to your old potting soil, you should be able to use this again.

How Should You Store Old Potting Soil?

To get the most out of your potting soil when you’re not using it, proper storage is necessary for it to last longer. As an organic material, it can still develop unwanted diseases and even mold and fungi. Good potting soil storage will eliminate any of this from happening.

If your potting soil is in its original unopened packaging:

If your potting soil has been removed from its original packaging:

Do your best to follow these instructions to help keep your potting soil as fresh as possible. This will be perfect to reuse when the cold season ends. And you can definitely save yourself the need to spend money to buy new potting soil in the future.

Can You Get Sick from Handling Old Potting Soil?

It’s easy to worry about whether or not your old potting soil has developed a disease you can get sick from. It’s a compiled mixture of bacteria that help plants grow. Should you be worried about getting sick when using old potting soil?

Their results confirmed that potting mix is not a direct cause of the infection when used by their test subjects. But rather, it was a combination of poor health and long term smoking that affected their body’s ability to acquire the disease.

One way of keeping safe when using old potting mix is using garden gloves and using a face mask. These will protect you from possible fungi or bacteria that’s growing in your old potting soil. Other than that, there isn’t too much to be worried about. It is relatively safe to handle old potting soil.

Does potting soil, or potting mix, go bad? No it does not. Store it in the right environment, in the proper containers, and away from the outdoor environment.

Potting soil can last up to a year if you store this material the right way. It will not go bad or rot. It will definitely not be harmful to your health despite its age.