Two household names in the power tool industry, both Dewalt and Porter Cable make recognizable and high quality products. You might be familiar with Dewalt’s long-lasting and strong brand name, but Porter Cable also has a very impressive history and brand.

Both brands make a great selection, but which is best? We’ll walk through Dewalt vs Porter Cable and answer the question.

​Background of Dewalt and Porter Cable

While history doesn’t make for a good product, both Dewalt and Porter Cable have a rich past that we thought really added to the brands they have created.

The History of Dewalt

Let’s start by looking at the history of Dewalt. What started with an idea by Raymond DeWalt has blossomed into a booming business.

DeWalt came up with the idea for the company in 1922. He formed the company two years later with the Dewalt Products Company in the sleepy town of Leola, Pennsylvania.

Here, DeWalt introduced the company’s first tool with the Wonder-Worker – a nine-way configurable woodworking machine. After this, the company grew in a hurry and soon moved to Lancaster, Pennsylvania.

It was in 1947 that the company changed its name to Dewalt Inc. as it is known today.

In 2001, Dewalt hit a fever pitch, producing more than 200 models of power tools and over 80 accessories. Today, Dewalt continues its focus on power tools, and makes excellent products in almost every line of power tool available.

Dewalt prides itself on producing power tools that are American made. It focuses on both the contractor and the homeowner and has found great acceptance in both of these consumer categories.

The company focuses on really creating products that meet the demands of the jobsite. It is a brand that is known for its toughness and durability.

Its power tools are productive and help a user be more efficient in their everyday use.

Dewalt has become a leader in the industry for power tools. Its name is recognized around the world, and it is a brand that is highly trusted in the marketplace.

The History of Porter Cable

As we compare Porter Cable vs Dewalt, we see that Porter Cable has a long history as well, dating back to 1906. It was then, that the company started out as a jobbing machine and tool shop.

A few years later in 1910, the company began producing products such as pencil sharpeners, automatic tire pumps, and gas lamps as merchandising items to get people in the shop.

In 1926, Porter Cable got serious about its capabilities and launched the first portable belt sander. Next, came circular saws with the High-Speed Helical Gear Drive Saw in 1928.

Over the years, Porter Cable has continued to innovate and launch a series of products that revolutionized the way that consumers used tools.

Today, the brand is known for its dependability. It produces a range of solid performing power tools that relentlessly deliver and are accepted generation after generation.

The company produces a range of power tools, pneumatic tools, and accessories that are geared more towards professional users. The brand has, however, found acceptance in the homeowner market too.

When we looked at Dewalt vs Porter Cable, we found the two brands were really worlds apart.

Dewalt is extremely well known throughout the industry by professionals and novice users alike. Its trademark yellow is a symbol of pride with many users, and the company takes every opportunity to promote itself with its customer base.

Porter Cable’s major shortcoming is in its low self-promotion. The company is humble beyond words and really relies on its customers to spread the word about the brand.

There are many things that we like about Porter Cable saws. The durability of its saw models is traditionally high-end.

In particular, we liked that its cords are thicker in comparison to Dewalt, which is always a part of the saw that gets damaged easily.

Porter Cable also excels in the housing construction of its saws and power tools. They can withstand being dropped without suffering any surmountable damage to them.

Not to say that Dewalt doesn’t produce durable body housings, but their saws are typically lightweight which reduces the overall protection of the saw.

Where we really see Dewalt take the lead is with the advancements in its technology offerings on its power tools. The company integrates the most up-to-date technology enhancements that the savvy contractor or homeowner can really take advantage of.

We liked Dewalt’s Bluetooth features on many of its products. Using a phone app, a user can customize and manage power tools like the impact driver from the company.

This is only enhanced by its strong Lithium-Ion battery technology that allows top performance out of its tools.

Dewalt really pushes the bar when it comes to the development of new products. It is a brand that is attractive to an up-and-coming contractor professional as well as a younger demographic of homeowners that are enticed by the technology offering the company provides.

Both brands do offer solid warranty coverage for their products. Dewalt has one, three, and seven-year warranties on its power tools while Porter Cable offers a standard three-year limited warranty on its entire product range.

Porter Cable is a lighter saw brand in many categories, which does have its advantages. However, for the combination of weight and power, they just don’t compare to Dewalt.

Dewalt really excels as a company that produces very lightweight, powerful saws. The kind of saws that you can use for hours on end without feeling fatigue set in.

They combine that with top-in-class power.

Dewalt also performs well with its orbital action and offers plenty of cutting power with good accuracy and precision.

Porter Cable does have strong, aggressive motors in its saws, but that is relative to its price point. In other words – for the price, Porter Cable makes a very powerful saw.

Many of the users that Dewalt caters to grew up on the Dewalt name and know that signature yellow color. Here, Porter Cable struggles a bit.

It is not as well-known a name and does really depend on the generational support of its products rather than technology advancements to reach a new demographic of customers.

As we hinted at earlier, we think a big factor between Dewalt and Porter Cable is the difference in price between the two companies. Porter Cable commands a much lower price than Dewalt, which some suggest is because of the name recognition.

We tend to disagree as Dewalt really makes a strong effort to continually update its product line with new offerings that meet the needs of the market. They have more features and offer more benefits which in our minds equates to a higher overall price.

Porter Cable, however, does offer good quality with products that will perform as you expect without having to pay more to get them. Its power tool family may be simpler, easier-to-use, and more durable but you aren’t expected to pay more to reap the rewards of these benefits.

As you can see, Dewalt offers plenty of saws that we think quite highly of. These saw models are our favorites as they performed extremely well and gave plenty of precision with their cutting abilities.

These are all very capable saws that we think you will be beyond satisfied owning. Plus, they carry the Dewalt name, which we think regard with fervor.

You’ll do well with any of these saw models stocked in your workshop.

We do recommend some saw models from Porter Cable as top contenders for your woodworking applications. These saws performed well and gave plenty of power and cutting accuracy, especially our top jigsaw pick the PCE345.

This has earned them high marks with us, and we think they will impress you as well as being a more affordable saw option. 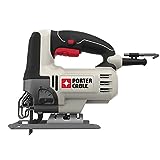 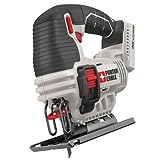 Our decision was pretty clear when choosing Dewalt vs Porter Cable. We stand firm that Dewalt is the best brand to purchase a saw from or any other power tool you might need.

The company offers all the top technology features in its power tools, including saws, and it has top of the line Lithium-Ion batteries which is a boon in cordless models.

We also like that Dewalt comes to market with new products on a continual basis and really places a focus on the needs of contractors and consumers alike and all the applications that its power tools are used in.

This doesn’t mean Porter Cable produces bad products. ​In the contrary, Porter Cable is a very high quality brand, especially for the price point they serve.

In the mid-range power tool market, Porter Cable is a very adequate and highly rated brand.

With that being said, if you can afford a Dewalt power tool, you won’t go wrong. In the end, we choose Dewalt as the best brand for saws in the market over Porter Cable.